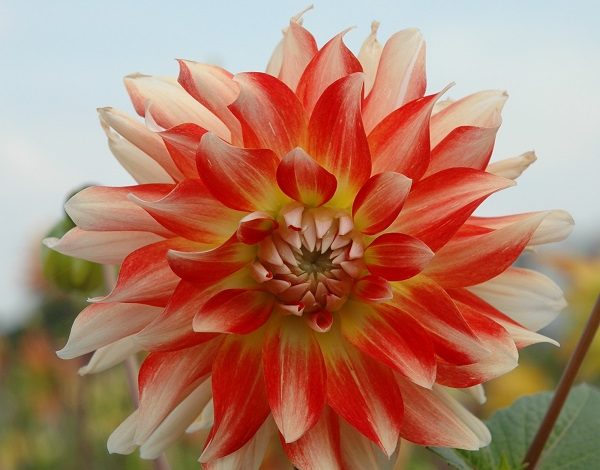 Dahlias: Their care and cultivation

Native to Central America, dahlias are named after plant collector Andreas Dahl who was born in Sweden. From its original basic form the Dahlia has come a long way to the huge list of cultivars available today

One of the easiest plants to grow, the dahlia is tolerant of a wide range of soil types and situations. The ideal of course is a light open soil in full sun. The plants, which come from the modified root or tuber are not frost hardy and therefore should be planted out in late May or early June depending on your location in the country. In some very mild south coastal locations this date can be brought forward by several weeks. The tubers should be lifted in the late autumn and stored in a frost-free place over winter.

January/February
For best results and earlier flowers start your tubers off in a frost free location at around 10°C. Using John Innes No. 1 or a soil-less multipurpose compost, plant the tubers with their crowns just above the surface and water well. After 3-4 weeks the first shoots will appear.

March/April
During March and April as the shoots begin to develop increase ventilation and allow the plants to harden off by reducing the temperature. This can also be achieved by placing outside in a cold frame or cold greenhouse.

May/June
When all danger of frost has passed the dahlias can be planted out into the border. Shorter growing and dwarf varieties can be planted in pots for the patio. Prior to planting, dahlias will benefit from a soil dressing of blood, fish and bone organic fertiliser at 2 oz or 34g per square metre.
As they become taller, the plants will become bushier if the central growth tips are pinched out; this will also encourage flowers buds to develop on lateral growth. To avoid the necessity for all previous steps dahlia tubers may be planted straight into the ground at this time, but the plants will flower later in the season compared to ones started off inside.

July/August
As flowers begin to form apply a fortnightly feed of a high potash liquid feed, tomato food is ideal for this. Mulch around the plants to conserve water and regularly remove dead and fading blooms. Taller varieties will need supporting with canes or dahlia stakes at this point.

September/October
Regular feeding and dead heading will ensure a continuous display of colourful blooms. Towards the end of this period a final top dressing of sulphate of potash will help the tubers to build up and keep in optimum condition for winter storage.

November/December
As the first frost blackens the foliage, cut it down to within a few centimetres at the tubers. Tubers can be lifted or alternately, can be overwintered in free draining soils where they can be mulched and left to overwinter in the garden. Once dry, remove remaining soil, and set them out in trays and dust with sulphur to prevent fungal attack. The tubers should then be covered with dry peat or sand and positioned in a frost free but airy location. Cover with layers of sacking or newspaper in really cold conditions.